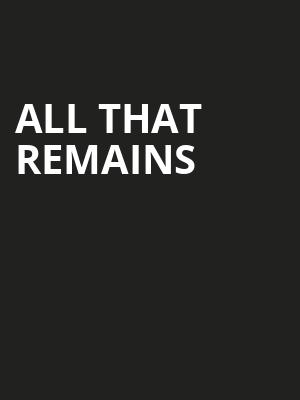 All That Remains Used under Creative Commons License

Why See All That Remains?

celebrating 15 years of The fall of ideals!

All That Remains are a metalcore death metal band, from Springfield Massachusetts. They provided the main theme tune for the film Saw III. Their high-energy thrash metal will have hardcore metal fans head-banging through the night and have you buzzing for the rest of the night. Spring 2022 sees All That Remains hitting the road in celebration of the 15th anniversary of their breakthrough album 'The Fall of Ideals'. You'll definitely hear them before you see them. This is one party you don't want to miss!

Formed in 1998, All That Remains, which consists of Philip Labonte, Mike Martin, Jason Costa and Jason Richardson, have released nine albums and sold over a million records worldwide. Though they released two albums prior to The Fall of Ideals, the 2006 album is considered to be their breakthrough release. Expect to hear 'The Air That I Breathe', 'It Dwells In Me' and 'The Weak Willed' when All That Remains play The Fall of Ideals in its entirety this Spring.

Sound good to you? Share this page on social media and let your friends know about All That Remains at The Depot.